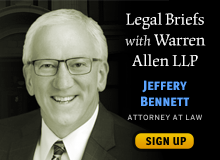 This article is general in nature and is not intended as legal advice for any specific issue that might arise, since every situation is different. Always consult a knowledgeable landlord attorney with your specific legal issues.

A very recent court case highlights the ongoing importance of always conducting background checks on potential tenants.  This particular situation arose at an RV park when two overnight guests refused to vacate despite never being offered a rental agreement.  There were unusual circumstances that led to the situation, but the main point is to never let anyone become a tenant without running a thorough and accurate background report first.

Without getting into all the case details, suffice it to say that because of an inadvertent mistake on a background check, the couple claimed that they had become “tenants” (they were not) and refused to leave the park.  This forced the park to issue a formal eviction notice and go to court, at which point the guests demanded what turned out to be a two-day jury trial.  (NOTE:  While uncommon, defendants in an eviction case are entitled to a jury trial under Oregon law if they demand one.)

Before the actual trial, the case dragged on for over two months primarily due to court scheduling issues.  In the meantime, the couple harassed other park residents with their “beliefs” and promoted their hate speech websites by handing out unsolicited flyers.  The couple then represented themselves at trial and mostly used it as a forum to rant to the jury about their beliefs.  The jury returned a verdict for the park, so the couple will soon be evicted by the sheriff.

For RV parks, this highlights the need to include in your guest registration documents Oregon’s “vacation occupancy” language stating that: (1) the occupants rent the RV space for vacation purposes only, not as a principal residence, (2) the occupants have a principal residence other than at the RV space, and (3) the period of authorized occupancy does not exceed 45 days. This prevents occupants from becoming “tenants” and should allow you to have them removed as trespassers if they refuse to vacate upon request.  Also be sure to NEVER accept monthly payments from guests, which could arguably make them “tenants.”  Only charge and accept daily rates from vacation occupants and never let them stay more than 45 days.

This case also reinforces the need for all landlords to conduct thorough background checks on every tenant applicant.  There are numerous online tenant screening companies offering this service.  A tenant screening service can reveal important information that Oregon landlords can consider when denying an applicant.  This includes, among other things, negative credit history, certain criminal convictions, prior evictions, and other information that might threaten the health, safety or right to peaceful enjoyment of the premises for other residents.